History Does Repeat!
… this time at the Ohio Governor’s Residence

Mary Alice explained that due to the oak paneling in the public area of the Residence, the living room tended to be dark for evening events and during tours on cloudy days.  Additional light was needed. Residence staff sought advice from restoration experts at the Ohio Historical Society who provided guidance regarding the proper size and style of fixture and directed them to trade catalogs from the 1920s, suggesting several styles that might be appropriate for the Residence.

For months, Residence staff had searched unsuccessfully for an antique chandelier made by an Ohio company that would be of appropriate size and style for the living room.  Eventually the Kasich’s decided to look for an Ohio business or crafts-person to create a historically-inspired chandelier.  Coincidentally, during a tour of the residence, a Cleveland resident, hearing about the origin of many of the mansion’s furnishings, asked which metalwork had been furnished by Rose Iron Works.  None.  Lack of familiarity with our work led to Googling, followed by First Lady Karen Kasich’s interest in exploring Rose Iron Works as a potential source for the new chandelier.

To help explain the style they sought, Mary Alice offered to send a photograph. She forwarded a page from a catalog from the Cincinnati Artistic Wrought Iron Works Company, which had operated in southern Ohio for many years and produced fixtures for Revival-style houses like the Residence. 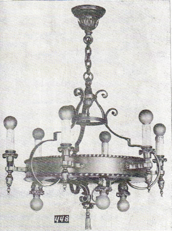 The image emailed to me was déjà vu!  Item 448, the favored design, was fascinatingly similar to drawings created in 1930 by Paul Fehér, a Rose Iron Works designer,  which were used most recently by Melvin Rose, my father, to create chandeliers for The Union Club, Cleveland  as well as for entrance hall fixtures crafted for the Hunting Valley estate of the late Joe Gorman.

I was thrilled! This looked as though it might be a delightful project!

After First Lady Kasich and her staff reviewed a series of emailed jpg’s, as well as the material on our web site, I was invited to share lunch with her, then to meet with Mary Alice, Ann Boeckman, residence manager, and members of the Ohio Commodores (who had agreed to assist with fundraising) to further explore our potential involvement in the project.

And so it began.

A full size blow-up of Cincinnati Artistic 448 was viewed in place. In depth discussions about design, craftsmanship and lighting concerns yielded agreement that our task was to use 448 as the design backbone with interpretation influenced by Rose Iron Works’ tradition.

Examples of forging styles, repoussé leaves and hand crafted tassels were shared to assist in eliciting preferences for the details to be integrated into the new fixture.  Photographs of the living room, its furnishings and relevant architectural details surrounding it within the mansion were taken for use while designing.

Back at our studio, evenings and weekends were spent with Paul Fehér, my grandfather and my father looking over my shoulder as I sat at the drawing board each of them had used. Sadly, I never met Paul Fehér, nor spent adult time with my grandfather, but dozens of my father’s lectures vividly flowed through my mind as he guided my hand while drawing the scroll shapes and choosing material section sizes for each of the emerging chandelier’s members.

Several features found within the living room seemed important to capture in the fixture design.  The quatrefoil found in the plaster ceiling molding  led directly to the shape of the six pair of arm ends as well as to the choice of tubular mid section of the vertical arm members.

The fleur-de-lis, repeated within the sconces on the surrounding walls,  served as inspiration for the upper arm repoussé leaves as well as center ornamentation.

Our interpretation of Jacobean Revival influenced several facets of the design. I chose to simplify 448 slightly by emphasizing basic shapes within the arms, oval, rectangular and diamond, as well as emphasizing the arches formed by the three support arms.  Creating depth and shadow was accomplished by adding a second layer, a laminated inner scroll.  This also served to provide a hidden wiring race. Its creation, however, added significant construction time!  The scalloped upper and lower band edging is reminiscent of details chosen frequently by Paul Fehér and my father.  Happily, the 448 design called for two tassels. These would be modeled after one which  my grandfather used as an  explanation of what might be crafted of steel.  The upper canopy was also simplified.

Having worked out many of these details, another trip to Columbus confirmed First Lady Kasich’s and Mary Alice’s approval of a final design. The budget was approved and work began. My pencil drawings were converted to detailed CAD working drawings.  All construction details were refined and sub drawings of the components were created.   Full size versions of the scrolls were prepared for use as shop templates.

The primary team creating the fixture included art smiths Jim Tyson and Steve Moorhouse, as well as Jeff Dietz, draftsman, and Mike Homa, welder.  A number of other staff members  assisted by providing either hands on or consulting assistance.

Jim began by creating the central band.  A blank with scalloped edge, as well as the center disc were prepared.   Jim then textured the steel by hand hammering, then rolled the band into shape.

Simultaneously, Steve began to forge the main scroll framework.  Pieces were cut and ends forged to create the scroll flares.  The bars were then hot formed to match the curves of the t templates.  Rings were formed, welded and textured.  He then carefully assembled the individual pieces with acute attention to maintaining shape as well as dimension.

Jim crafted the six arms by forging blanks to form the cup shaped quatrefoil ends and the reverse curved extensions. Tube pieces were then cut and welded into place creating the mirrored quatrefoil shaped mid-sections and wire path.  The arms were then fastened to the main band. Rivet heads were textured to create future highlights.

Each of the other ornamental details was hand crafted.  Square bar was twisted, formed into rings, then carefully cut to maintain continuous spirals and welded into place.

Solid balls were chisel cut and hot engraved to create the tassel tops.  Wire was twisted in trios, formed and welded to form the tassels.

Creating the repoussé leaf ornamentation for the upper center section, arms and down lights involved a series of steps.  Each shape started life as an outline drawing then converted to a 22 Ga flat blank.    The blanks were  veined, formed and curved by countless hammer blows using a wide variety of tools.   Forming was done by hammering either against a stake type tool or against a backing of lead.   Parts were annealed (softened by heating until red hot and cooling slowly) several times during the process. While hammering, Jim and I spent many  hours reflecting about my grandfather and the craftsmen who, over a century ago, created the myriad of treasured tools we were using!

As the individual decorative items were completed, details such as lighting component assembly and wire path were resolved and required parts made.  It was decided to use standard base, incandescent bulbs of a shape similar to that depicted in 448.  LED energy efficient bulbs will be able to be used in the chandelier in the future.  A custom support system was designed for installation in the ceiling in order to support the approximately 120 lb chandelier.

Finishing was next.  The entire chandelier was sandblasted twice; first using aluminum oxide grit, second with glass bead. After the blasted surface was highlighted by hand polishing, the entire surface was coated with black lacquer.  The matt black was again burnished by hand rubbing using various grades of Scotch-Brite and Emory cloth. This is done to create silvered highlights which reflect light and subtly show off the texturing created by all of the handwork.   A final coat of clear, low luster / matt  Permalac was applied to provide a long term care free surface. 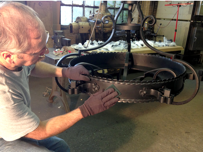 The chandelier was finally assembled and wired. 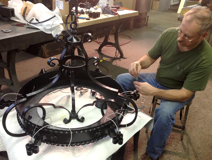 Then … we stepped back and looked!  My grandfather and father would be proud! 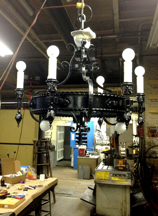 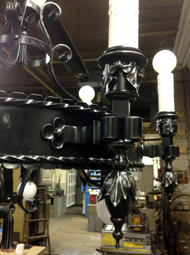 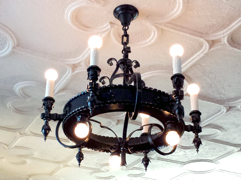 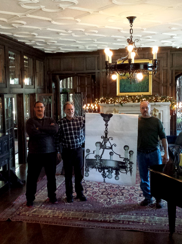 It’s important to mention that in addition to those specifically mentioned in this text, there are numbers of others at Rose Iron Works (technical, purchasing, administrative, financial and management) without whom our work would not be possible.

I’m also  grateful to our “expanded” team of vendors who contributed their skill or advice to the chandelier project. These include Dan and Adam Christopher – Christopher Machine, JP Palmer – Repko Machine and Fab,  Erik Ferry – Atom Blasting and, Jim Miller and team – American Japanning, Bob Halper – Halper Lighting.   These are all fantastic Ohio companies!

I hope you get a chance to see the chandelier. If you do, examine the chain supporting it.  I couldn’t resist creating a special middle “O”  link …. as a salute to our great state!!! 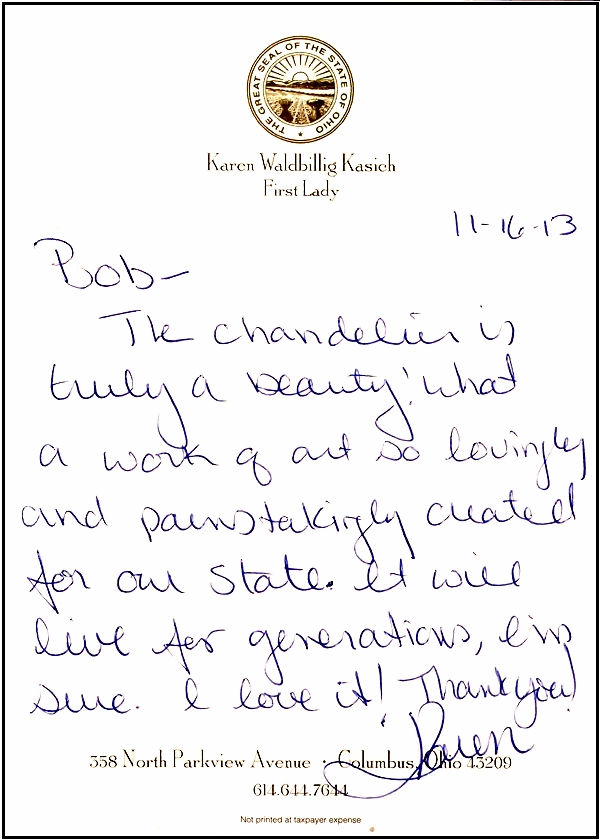