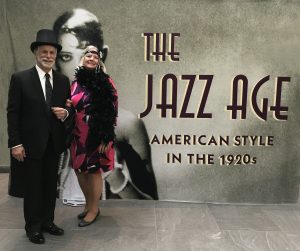 Bob and Carolyn Rose at the Opening!

The Jazz Age: American Style in the 1920’s show, immensely popular at  the Cooper Hewitt in New York City for the past few months, will open at The Cleveland Museum of Art on Saturday September 30. The first major museum exhibition to focus on American taste in art and design during the dynamic years of the 1920s and early 1930s. Tickets on sale NOW for this blockbuster exhibition! 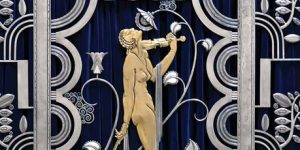 The show features our now American Deco iconic Muse with Violin screen as well as Mirror and Console Table, two pieces which have not been available for public viewing for many years.  Also displayed is the center balcony railing from the former Drury Theater of The Cleveland Playhouse.  It is one of the finest examples of Martin Rose’s traditional work.  Be sure to look for the catalog of this outstanding show.

More about the show: