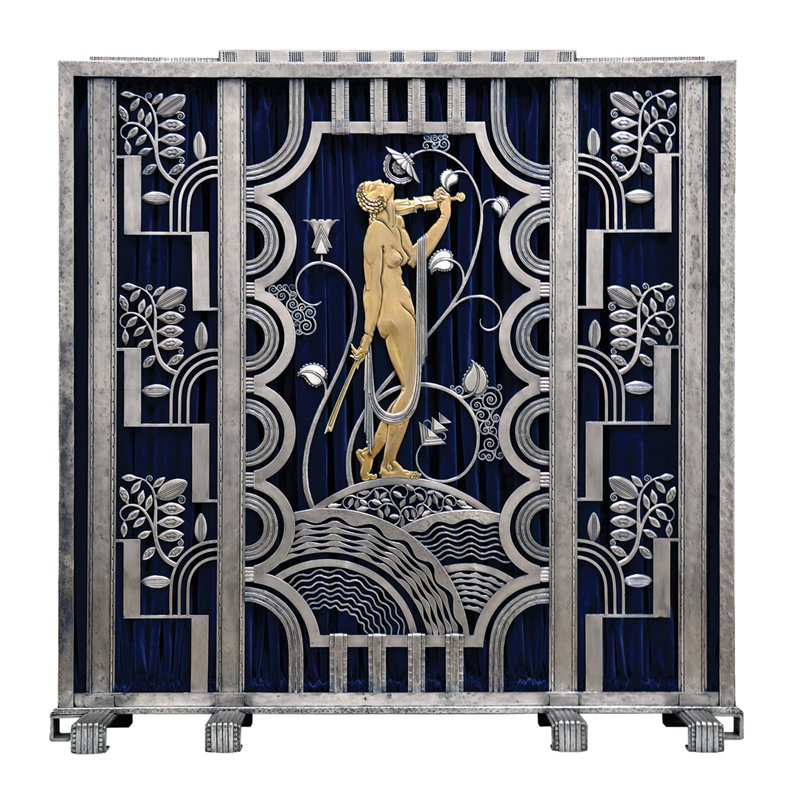 Decorative room screen, Fehér-Rose 1930, approximately 62″ x 62″, in Art Deco motif, central figure of woman holding a violin surrounded by classic leaf and concentric circular elements. The figure stands on a marvelous series of concentric fluid wave forms, detailed with varied texture and thickness. She is surrounded by sensitive scrolls and delicate elements of floral motif in contrast to the balance of the screen. These are accented by leaf and lotus details so typical of the Deco period. Of particular note is the hallmark restraint used by Paul Fehér and Martin Rose in balancing positive and negative space, most clearly noticed in the side panels. The framework and elements are made of silver plated steel; the central female figure is gold plated carved and tooled brass. A velvet rear curtain hangs from the top as a backdrop to the entire piece.

The screen, designed by Paul Fehér in 1930 was executed by Martin Rose as an example of the studio’s capabilities. Inspired by the construction of Severance Hall, home of the Cleveland Symphony, the screen has become one of the icons of American Deco metalwork, referenced in many publications on the subject. The screen is the quintessential example of the Rose and Fehér’s refinement of European style by introducing a greater balance between negative and positive space. Originally shown in the 1930 May Show, the piece has toured many museums, including: The Museum of Fine Arts, Boston, The Metropolitan Museum of Art, New York, The Art Institute of Chicago, The Renwick Gallery of the Smithsonian, The Center for the Fine Arts, Miami, The Joslyn Art Museum, Omaha, The Philbrook Museum of Art, Tulsa, and the Minnesota Museum of Art in St. Paul. It is currently on long term loan and displayed at The Cleveland Museum of Art.

Our decorative screen, Muse with Violin, is generally regarded not only as the single most notable artistic achievement produced at our studio, but as one of the finest examples anywhere of American Art Deco metalwork. The screen, currently on long term loan to the Cleveland Museum of Art, is featured along with Viktor Schreckengost’s Jazz Bowl in one of the newest galleries.

Various stories have been passed from generation to generation regarding the origin of the screen. One recollection is that the piece was commissioned for the Green Room of Severance Hall, the magnificent concert hall designed by the architectural firm of Walker and Weeks, which is still the home of the Cleveland Symphony Orchestra. The name of the possible patron, however, was not recorded. According to the story, she died before the screen was finished, and her estate was unwilling to pay for it. Another version, the most likely, speaks to Martin Rose’s desire to demonstrate our studio’s significant capabilities. With this as impetus, and honoring his close association with Walker and Weeks, he and Paul Fehér created the masterpiece, clearly inspired by the design and construction of Severance Hall, then mid-way complete. Displaying the screen was Martin’s hope of promoting such business in the face of the deepening economic depression.

In any case, at the time the screen was the source of much recrimination among various members of our family, who resented the use of hard earned funds for such use during the depression.

The subject matter of the screen, a nude woman surrounded by ornamental motifs, follows a formula frequently employed in French Art Moderne designs. Parallels to the central figure can be found in the work of Rene Lalique, Edgar Brandt, Erte, and other designer of the period. Interestingly, the figure has distinctly African features, and is quite close in pose to photograph of Josephine Baker, the popular dance hall performer, who was the rage in Paris at the time, and to whom the design surely pays tribute. The theme of music is expressed not only by the figure with the violin, but by the branches which frame the figure, which loosely resemble a bass and treble clef. Other lines seem to evoke sound waves or the ledger lines of musical notation.

The interior décor of Severance Hall provided general design cues. The grand foyer of Severance Hall is in an Egyptian Revival style, with elaborate bronze railings, etched glass doors set in bronze and gold leaf, and fourteen inset paintings of Egyptian scenes by Elsa Vick Shaw. The Green Room is also mainly in the Egyptian Revival style. While the design of the screen is not assertively Egyptian the nude woman inhales the fragrance of what seems to be a Lotus Blossom, an Egyptian plant, and, as already noted, her face is distinctly African in its features.

The concert hall also features Art Deco and French Art Nouveau elements which are echoed in the screen’s design. For example, the screen’s vertical elements echo the pilasters of the concert hall, while its leaf patterns are reminiscent of the stage’s leafy décor.

Melvin Rose recalls that Paul Fehér and his father often argued about the execution of designs. Feher favored densely packed motifs, in the manner of the French Art Deco of Edgar Brandt and Paul Kiss; Martin Rose believed in creating a balance between positive and negative space. The screen provides an almost perfect balance of these two approaches. It is denser in effect than most creations of Rose Iron Works, but has as boldness rather different from contemporary French work. Martin Rose’s “stamp of approval” is indicated, in literal fashion, by the Rose Iron Works signature at the upper left.

Several sketches and working drawings by Paul Fehér, including a large drawing executed to exact scale, document successive stages in the evolution of the design. Technically, the screen employed a range of unusual techniques. The central figure, the largest single piece of metal in the screen, was a thick commercial bronze plate, which was carved and embossed into its present shape and then finished with gold plating. Most of the remaining areas of the screen are forged iron joined by welding or metal screws which were then finished with silver plating. Both cold and hot rolled steel were used, and different forms of hammering were applied to provide an additional element of textural contrast. Small accents of bronze and aluminum were then added with blind rivets.

The screen was first exhibited at the Cleveland Museum of Art in the May Show of 1930. Several sources state that the screen won an award at that time, but that is not correct, since the jurors felt that it would be unfair to give an award to an object which was virtually the only example of its class, and thus had no serious competition. However, the brief summary of the show by the jurors devoted more attention to the screen than to any other object, stating:

Where only a few objects were entered in a class, no prize was given, in accordance with the rules laid down; but in the wrought iron class the Jury wished to express special commendation of the screen entered by The Rose Iron Works, Paul Fehér, Designer. This in their opinion was one of the outstanding exhibits and should be dignified by appropriate recognition. (The Bulletin, 1930: 94).

We were particularly taken with the screen in ironwork, executed by the Rose Iron Works after the designs by Paul Fehér. Here is a thing of exceeding beauty. We venture to state that there is not an exhibition in the United States or on the Continent where this screen would not be acclaimed as masterful, both as to design and execution. Regardless of class, it was one of the triumphs of the May Show.

Shortly afterward, in 1930-31, the screen was selected by the American Federation of Art for inclusion in the Third International Exhibition of Contemporary Industrial Art which exhibited at The Museum of Fine Arts, Boston, The Metropolitan Museum of Art, New York, The Art Institute of Chicago and The Cleveland Museum of Art.

The growing fame of the screen was refueled by an exhibition of American Art Deco organized by the Renwick Gallery of the National Museum of American Art, Smithsonian Institution. Beginning in 1987, this traveled from the Smithsonian to the Center for the Fine Arts in Miami, the Joslyn Art museum in Omaha, the Philbrook Museum of Art in Tulsa, and the Minnesota Museum of Art in St. Paul. The Screen was not only included in the exhibition but was featured on publicity posters.